This is a funny article. While also terribly, terribly sad. You have been warned.

When I graduated from college, I believed that the amount of additions and deletions you put into GitHub was your impact in the workplace. The more additions you checked in, the more you obviously contributed to the codebase, the more valuable you were as an employee, and the better off the company was because of you.

You know that guy from the first “That Happened” post? He completely shattered that belief of mine. I mean, I was kind of starting to not believe that anyways, but this just shattered it.

Apparently, we had a problem with users entering in weak passwords, and we needed some password validation. This guy was tasked to work on that. Most people write a couple rules, or use a npm package, or at worst use an Ajax call to a CDN somewhere to verify their password. Not this guy.

Nope, this guy checked in the entire English dictionary in order to ensure that the password wasn't just an English word. Really. I'm not making this up. Here's the statistics on contributions in our main repository (he's currently #1): 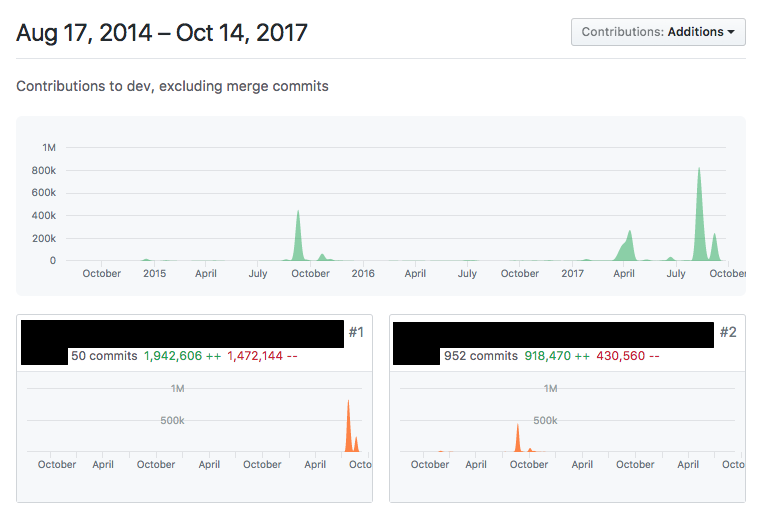 1.9 million additions. 1.4 million deletions. In 50 commits. I think he added and removed that dictionary (represented as a .txt file) several times as he was fine-tuning which words he wanted to keep or remove. It also includes a bunch of random number sequences (like 1234) that are considered not secure passwords.

His justification for this code was that if GitHub went down, the password validation would continue to work. Little does he know that we don't deploy on production from a GitHub server, so it doesn't matter at all for production if GitHub is down or not. He probably also doesn't know that we have an effective SLA of one-nine reliability, so even if we used GitHub or a third-party service for some reason, they'll probably be up more than we are.

And you know what? I bet he isn't checking if said English words aren't substrings within the password either. And that some English words, such as “Euclidean” for example, might not be terribly bad passwords, while some not-English character sequences, such as “qwerty”, might be pretty bad passwords. And that if we wanted to internationalize our codebase (which is impossible already) and follow this precedent, we would need to add a dictionary for every language we wanted to support. And that every time the user updates the state of the password he or she wants to use during user registration, that updated password state has to be evaluated against the entire .txt file all over again.

It's okay though. Just use the largest EC2 instance AWS provides and users won't notice the latency. /s

Here's some reactions from my colleagues:

and when we realized that his code was actually released into production a week before when we noticed (the conversation died down but we thought it was because he had come up with a sensible solution, and didn't question it):

Yes, that's me adding the 😂 reaction. Because when you can't do anything about the situation you're currently in, it's better to laugh than to cry. I've been laughing quite a lot lately.