At the beginning of this year, I made a set of New Year's Resolutions that I thought were achieveable and meaningful. So let's take a stroll down memory lane and see how I did!

(I'm using this weird paragraph format instead of the list format because I recently upgraded to a newer version of hugo, the static website generator tool, and some of the markdown parsing is quite different.)

Establish more feedback loops for all the activities I want to get better at (PARTIALLY MEETS EXPECTATIONS): So I used this app called Productive and it worked pretty well for the most part in keeping me on track in terms of what habits I should be doing every single day, which formed most of the feedback loop mechanisms I established. There were a number of issues with doing things this way:

Technical issues with the app itself: I talked about this in my blog post about frustration management, but the app keeps crashing and losing my data, and doesn't handle backend migrations very well at all (e.g. some habits just get disconnected and don't work). Lately, they also implemented a very significant and disorienting UI change, which (IMHO) significantly decreased UX likability.

I can't handle this bullshit, especially for something as critical-path to my daily productivity as habit tracking.

The feedback loops are very forgiving: I like how forgiving they are in the beginning, and how you are able to add settings on, but I do wish there was a hard expiry sometimes between morning / afternoon / evening habits. I do morning habits in the evening sometimes, and sometimes I do habits the next day, which isn't great for my productivity. I guess I am cheating myself, but I kind of wish the app would help push me towards a healthier approach, even through tough love.

Sometimes I just don't give a shit: This is probably the biggest problem; some of the feedback loops I have I don't have a strong connection to. I got started with habit tracking because of that robbery, which pissed me off to no end, and I keep track of my journals because of how much they helped me climb out of a hole back in college. In contrast, I don't like myself w.r.t. how much I exercise, but it's hard to form up the habit to do so, especially since you lose progress the more infrequently you execute and therefore doesn't compound nicely.

In order to improve, I first need to maintain an emotional connection to the habits I actively track, so that I do them mindfully instead of mindless obligation.

It might also help if I had a habit tracker that I could build my own requirements for. I'm actively planning on having something out for this tied into the TinyDevCRM project I'm building early next year.

Minimize the amount of time I regret spending (DOES NOT MEET EXPECTATIONS): I regretted spending probably the vast majority of time this year. It SUCKED.

Things improved now that I decided to take a breather from career stuff (my problems are now solely my fault, hooray!!), but it's not certain that this wouldn't happen in the future when I return to the labor force. I need to do something in order to pace myself, because life truly is a marathon and not a sprint.

Go on a date, tackling the fear of emotional rejection (MEETS EXPECTATIONS): I actually went on 5 dates this year with three different people, in a 1 / 1 / 3 split. First date was pretty kooky. I took her to a really fancy French restaurant (where I was also kind of rewarding myself for having gone on a date at all), and went off the rails sideways. I learned that first dates generally shouldn't be done at fancy French restaurants. Second date was at a bubble tea shop. Third date at a very nice homey coffee bar that a friend recommended, and fourth and fifth dates at fancier restaurants.

Ultimately, none of these panned out for me. My heart just wasn't in it, and I didn't really know at the time whether I was going to relocate geographically. The first two conversations were also kind of sideways and the third through fifth didn't kick off since we didn't share a lot of the same interests. But I feel better about asking people out (and getting rejected and ghosted along the way), so that's a pretty big positive.

Run one half marathon in the summer, tackling the fear of being fat and resultant decreased mortality (DOES NOT MEET EXPECTATIONS): I signed up for a half marathon that started on 7AM on a Sunday, didn't practice, and missed going. So. That was fun.

Honestly, I don't know how much direct correlation there is between running half marathons and becoming less fat. I think a better approach to this is to exercise in smaller amounts, consistently, and to eat healthy food consistently. If that gets me 80% of the way there I think I would make that tradeoff. Ultimately though, it has to be something I enjoy doing.

Become really good at making dumplings, and make a lot of dumplings, targeting the fear of being incompetent in home economics (PARTIALLY MEETS EXPECTATIONS): I only made dumplings early on in the year, at a friend's place where he very graciously lent out his space so we could make dumplings together. We used my parent's recipe, and the result is as follows: 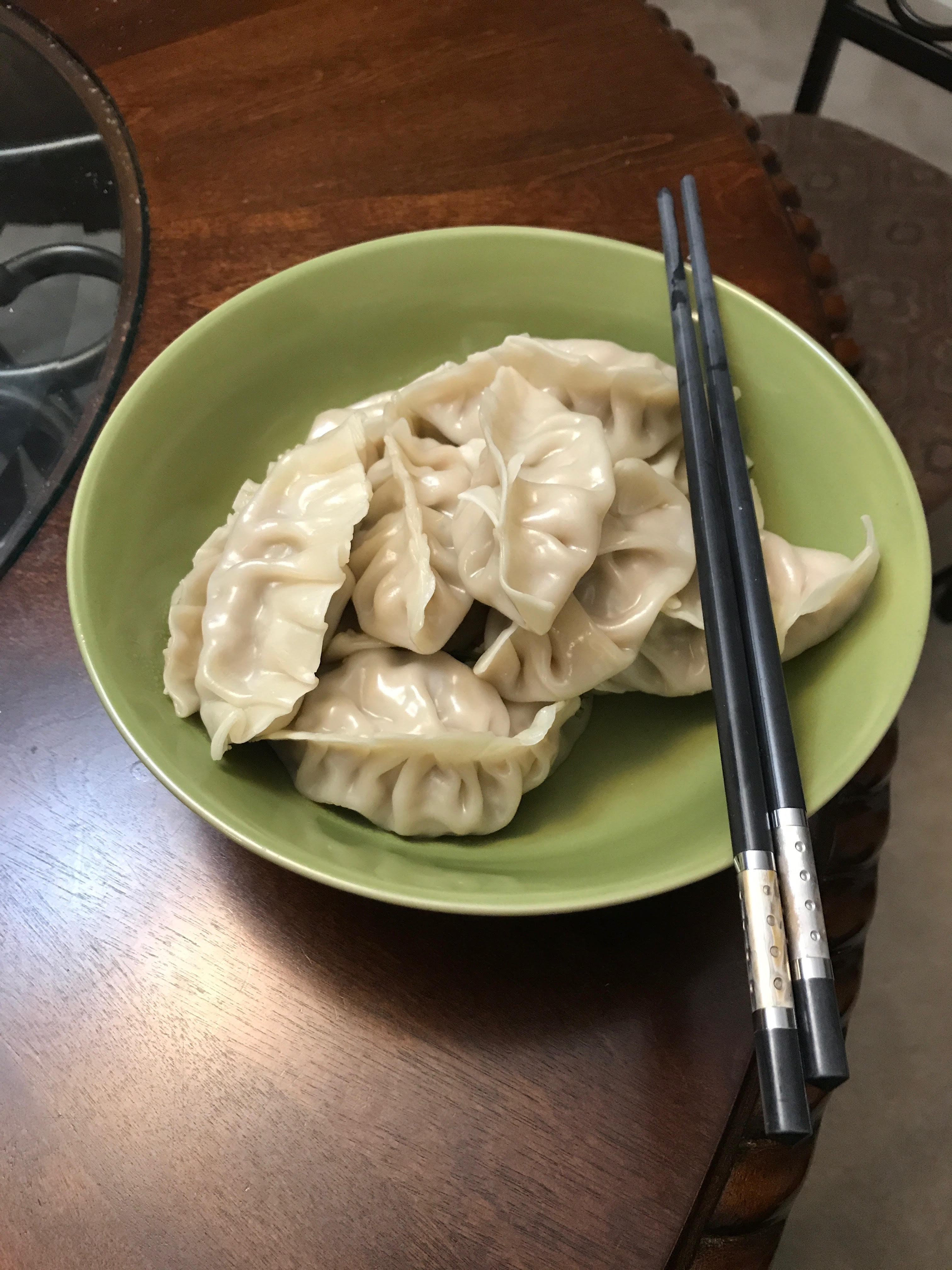 We used ground pork purchased from Trader Joe's instead of mincing the pork from pork belly ourselves as my parents did. We worked together in parallel quite well on different tasks involved in making the dumpling filling (mincing the ginger / garlic / onions / celery, deveining the celery, aerating the dumpling filling, etc.). This would be too much work for one person, given how we four spent about six hours making enough dumplings for half a week.

One severe bottleneck was how dry the pre-made dumpling skins were; coming straight out the package, they were extremely brittle and we could not fill up each dumpling to satisfaction. Next time we will create our own dumpling skins using freshly-made dough; it should be fairly simple and straightforward compared to the stuffing, and if there is excess dough we can create noodles from them. It is also easier to repair self-made dumpling skins since the dough is so fresh; if it dries out, just add water and re-mix.

Our folding skills were satisfactory, in particular because these dumplings were steamed rather than boiled assisting in retaining the integrity of the dumpling, but they could use improvement.

Now that I know I can make dumplings, I'm looking forward to making more next year.

Lay the groundwork for and begin executing a plan for financial independence, targeting the fear of running the rat race for the rest of my life (DOES NOT MEET EXPECTATIONS): I don't actually have a plan around how this will work. I think a set of heuristics may work better instead.

Go to PyCon 2019, tackling my fear of intellectual incompetence (MEETS EXPECTATIONS): So I went to PyCon, and it was a blast. What I liked most about PyCon was meeting all those great people, and seeing the variety of products that were on display for software engineers. I'll definitely see if I can go to PyCon 2020, especially since it is closer to where I'm based.

All in all, I think the feelings-based approach to resolutions went a lot better than a set of arbitrary objectives. Since I actually cared about most of these (or thought I cared about most of these), I went out and did them. Some of them I didn't really care about, and they might be things I need to care about or they might be things that are disposable.

I also read 19 books this year, categorized here! It's a good deal less since I spent a lot of time earlier this year working on my technical blog (and then got out of the habit of reading books regularly), but still a good number. Let's see whether I can bump that back up to the 30s.