Most people know Max Planck as the scientist, the guy who did some quantum bullshit. I think it's on the Wikipedia page, I'm just too lazy to look it up. If it was important to me, I would have scrolled more on the page. Besides, other people have beaten that horse already.

You may find my unholy lack of respect for the man disturbing, especially for somebody who helped make my field and career possible. That's the point. Max Planck was, in many of the most important things in life, an utter failure.

You might be thinking that this is a lot for one man to endure, and it is. Weaker men than Max Planck would strain and break under the stress. Problem is, if you don't strain and break, you start getting used to the suffering, and it cripples your ability to respond to bad situations, especially those of a Black Swan nature. You become too Stoic, too accomodating. You've survived this, so you'll survive that, right?

Melvil Dewey once said “when a tree ceases to grow, it begins to rot”. And so it did with Max Planck, who refused to change his worldview based on new and evolving situations.

At this point, Max Planck had two surviving sons, Erwin and Hermann, two grandchildren, and had re-married. He still had a family to take care of.

Then the Nazis came.

Max Planck didn't run, didn't fight, but endured and worked hard. When the Nazis fired Jewish professors, Max Planck stayed silent. When other scientists considered fleeing, Max Planck persuaded them to stay and invest in Nazi Germany. When the Nazis attacked Planck for teaching “Jewish science”, Max Planck resigned his posts like they told him to.

The problem with being smart is that you surround yourself with smart people, oftentimes people smarter than yourself. This is a problem because smart people usually succeed, and therefore they think they get what they want if they work for it. Not to mention how facts oftentimes have a liberal bias, as the only constant is change.

For one. Erwin Planck, Max Planck's second-to-last surviving child, got himself continually involved in politics and on Hitler's bad side, especially after the Nazis killed his friends during the Night of the Long Knives. After his involvement in the July 20th plot, he was dragged before a kangaroo court and sentenced to death.

So as a Hail Mary, Max Planck wrote to Hitler pleading for his son's life. Here's the letter, taken from this secondary source: 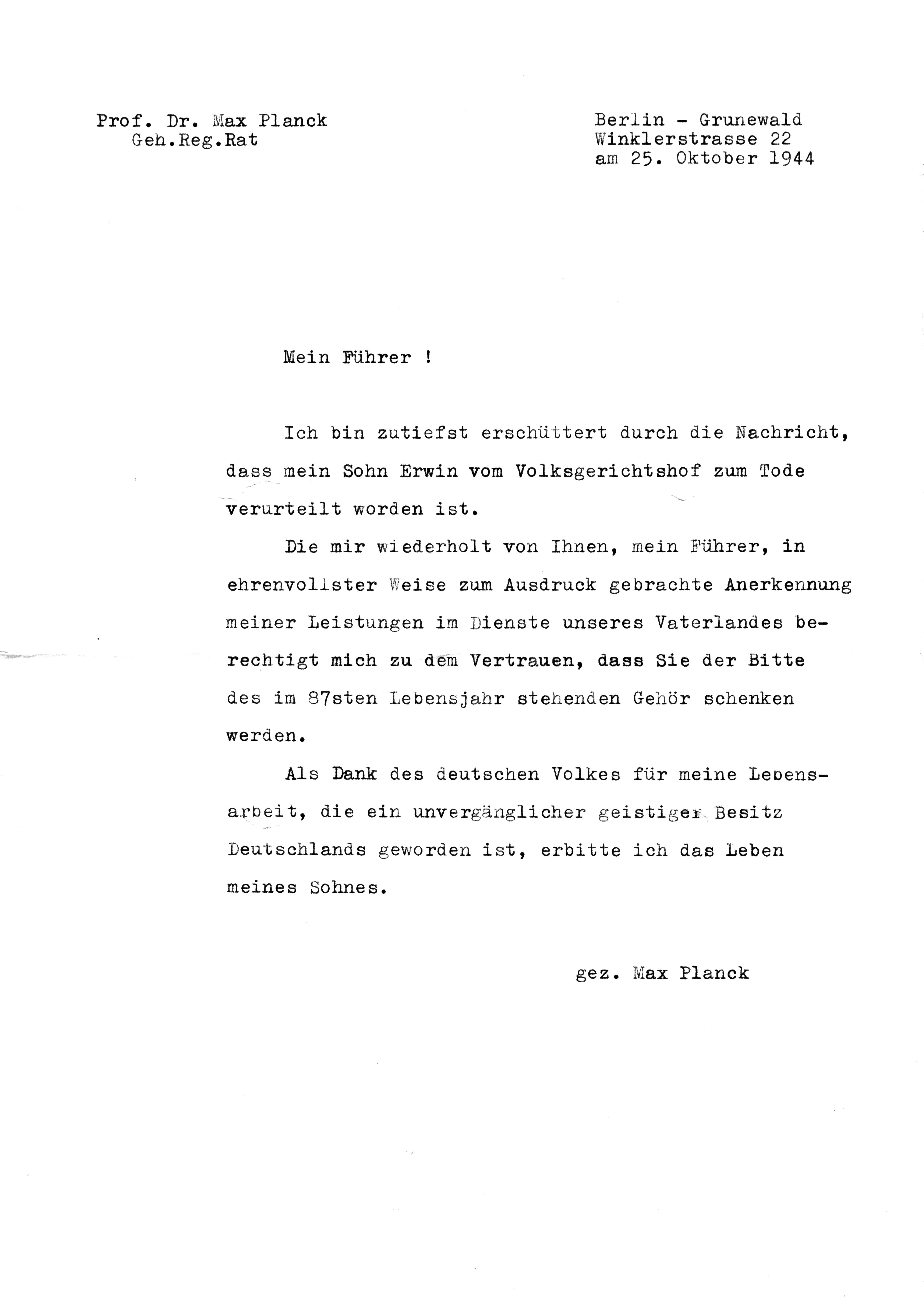 From the same secondary source, the translated letter reads:

I am most deeply shaken by the message that my son Erwin has been sentenced to death by the People’s Court.

The acknowledgement for my achievements in service of our fatherland, which you, my Führer, have expressed towards me in repeated and most honouring way, makes me confident that you will lend your ear to an imploring 87-year old.

As the gratitude of the German people for my life’s work, which has become an everlasting intellectual wealth of Germany, I am pleading for my son’s life.

What was Max Planck's mistake? Besides his entire response to the Nazis, by pleading for his son's life on the basis of his reputation, Max Planck crossed a fundamental rule of power. He assumed that because of his past accomplishments, he's somehow owed something by those in power he benefited. By expending himself in his work, Planck actually gave away any negotiating lever he might have had. If Hitler and the Nazis were rational (a questionable assumption under the circumstances), they would have assumed if he's begging like this, he's already tapped out in what he can deliver to Germany. Otherwise, why wouldn't he mention it? Therefore, killing his son as a loose end wouldn't result in any negative changes to German scientific output from Max Planck.

It would have made much more sense to lie, and say something like his draft papers on $BLAH could benefit targeting systems of the $FANCY_WEAPON_HITLER_LIKES, and that he will refuse to help the Nazis should they lay a finger on his son. Then they may torture or kill him, but if they did, they will lose out on an (imaginary) benefit to their own power in their imagined future. This may make them hesitate, buying Planck some time to bribe some guards or organize a larger effort amongst friends in high places to secure a release. At least then, if he failed, he would know he did try everything.

You might also say that Max Planck lost his son the moment the Nazis came to power. It was inevitable they would consolidate power, and it was inevitable that free-thinking minds like those science requires would oppose them. The time to speak out, to protest, had by that time long passed.

Erwin Planck was executed by hanging on January 23rd, 1945, the last surviving child from his first marriage, and the last member of his original immediate family. Max Planck died on October 4th, 1947, in the shattered ruins of his homeland. He saw his house bombed and his papers lost, his bloodline decimated, his remaining family left living under the mercy of conquerors (which in another timeline may not have been all that merciful), and his will to live ripped from his very soul from a life suffering without purpose.

You might say this is an unfair assessment of Max Planck's life. I'm not trying to be fair. Max Planck came from an academic, solidly middle-class family, with plenty of demonstrated intellectual horsepower, and ended up as I described. Plenty of people saw what was coming, and prepared for it by tweaking their principles (Einstein on pacifism, for instance).

But hey, we named a constant after Max Planck, so I'm sure that makes up for it.

I don't rag on Max Planck for shits and giggles. Rather, I see myself in him. Max Planck, like us, lived in interesting times, and he suffered for it by standing on the wrong principles. His sheer intelligence, vaster than mine, just goes to prove you can't dig your way out of these kinds of situations if you don't change those principles. That's why paradigm shifts are useful. Learning to operate in such a world keeps us unafraid of the dark, because only then we'd be better at it than those who would plunge us there.

I like living in the U.S. because I like the idea of powerful people also being fair. Americans are a fair people, we expect a fair deal, and we expect that good things happen to those who try. That's not a common sentiment throughout the world, especially in other powerful countries, and I think this idea is worth preserving because it is exceptionally divine. Holding that idea high takes constant work, because freedom isn't free. So sometimes, I find it useful to stare into the abyss and wonder what can be.

I don't see the past in our present tragedies, I see the future. When I see Hispanic children tossed into concentration camps (or camps where they're concentrated), I don't see the past struggles of Japanese-American internment. I see my children's fate if and when a conventional war breaks out between the U.S. and China. When I see ammunition dumps stockpiled in the nation's capital to be used on protesters, I don't see June 4th, I see the Lafayette Square massacre and its aftermath. When I see powerful people skirting the law, I don't see a return to federal government before the post-Watergate reforms, I see my future business crumbling under a need to pay protection money and explicit bribes on top of my taxes and “campaign contributions”. Because human nature is constant, everywhere, through all time. And everything in our world, even peace, prosperity, truth, comes to an end.

You might be asking why given such a nihilistic worldview, I bother getting up in the morning. Maybe this joke can help:

A mathematician and an engineer go into a bar and see a beautiful woman. The woman says, “You may approach, but you can only go half the distance between you and me each time.”

The mathematician gives up immediately. “I'll never reach her.”

The engineer takes off. “I'll get close enough.”

Just because something's impossible, doesn't mean it's not worth doing. Duct tape, baling wire, and chewing gum might not be a perfect solution to problems, but they do a good enough job. Every veteran programmer knows that. So that's why it's useful to learn how to kick cans down the road, and move mountains with a lonesome bucket and shovel. If staying where you are isn't an option, and it isn't, why not get up and do something about it?