I didn't realize some people were using quarantine to become Disney princesses, but apparently they are:

I don't think I've mentioned my dad's gardening habit on my blog before, and I think it might be an interesting topic of discussion. I think so far my dad grows cucumbers, wintermelon, green onion, water spinach, and “tan hua”. Yes, apparently you can eat “tan hua”, so after they bloom you can cut the flowers off and boil them to make broth. Apparently it's a herbal remedy for the lungs, which might be nice in a worldwide pandemic that attacks the lungs (though I've heard COVID-19 isn't a respiratory disease but a cardiovascular one that manifests in the lungs).

I've had the benefit of seeing maybe 50 “tan hua” blossom during my time back at my parent's place. I think my dad at least has video, but my phone is locked up and he's working. So here's a picture w/ proof: 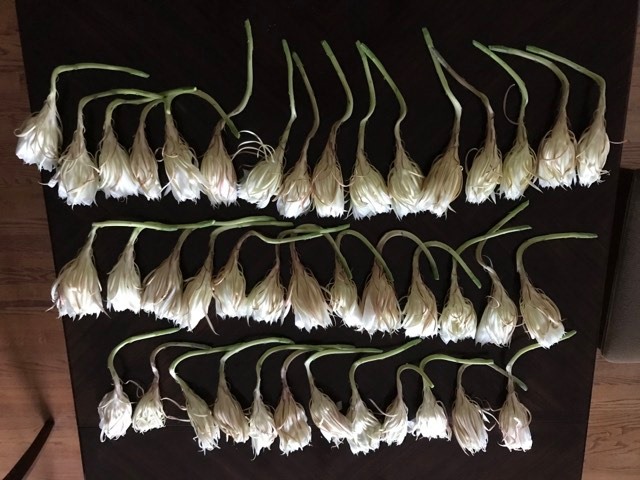 It's a lot of “tan hua”. And this is one harvest, there were two since I came back home, and I think my dad said there are maybe three or four harvests a year. So that's nice. “tan hua” soup is thick but not flavorful, you can kind of taste the flowers but not really. It's a weird sensation to eat. Not sure how to describe it, I think somebody with a sharper palate and who cares more can probably describe it better than I do.

Also TIL that cucumbers grow so fast you can harvest them every day. It kind of makes sense, it's mostly water. My dad has this farming thing on our deck with a bunch of these massive potted cucumber plants, and we harvest 1-3 of them for lunch every day. They're small, and curly and knobbly and I think they might have hairs on them that my mom washes off and I'm not sure whether fertilizer makes a difference to the nutrition, but they're not bad and I'm not dead yet, so I guess it's cool.

My dad also fishes a great deal, he used to catch a bunch of fish early on in my stay, but now that the water's warmer the fish don't like going near the edges of the lake (probably because they don't want to suffocate and because there's more food in the middle of the lake for some reason now).

I kind of want a ranch where I can raise chickens and grow my own potatoes and stuff. It's nice not having to worry about food security now, and it'll be even better not having to worry about food security in the coming years. I think you only need maybe like 2-3 productive acres in order to raise a family. I might want a bit more land so I can go hunting wild boar and stuff, like a European king :)